Spies in Congress: Inside the Democrats' Covered-Up Cyber Scandal (Hardcover) 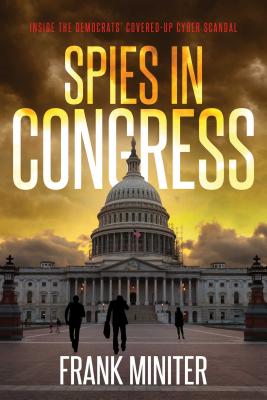 Spies in Congress: Inside the Democrats' Covered-Up Cyber Scandal (Hardcover)


Special Order
A spy ring was allowed to grow in Congress, and no one wants to talk about it.

When Imran Awan, an IT aide for Congresswoman Debbie Wasserman Schultz (D-FL), was arrested by the FBI as he tried to fly away to Pakistan, the media didn’t know what to make of the story. Was this just a bank fraud case or something more? Why was this team of congressional IT administrators paid chief-of-staff-level salaries? Why did they provide fraudulent data to Capitol Police? How had they evaded background checks?

As facts emerged, it became frighteningly clear this case was really about a spy ring that operated in the offices of more than 40 members of Congress, all Democrats. By following the digital tracks of this group of IT aides, Spies in Congress uncovers a real-life international spy thriller and unearths a shocking reality the U.S. government would rather we didn’t know.

Much of the media clearly wants to protect the party they favor, and the members of Congress involved don’t want to pay a political price. Even the Republican leadership in Congress has been reluctant to hold hearings or to ensure that an ethics investigation take place. We can still insist on an honest ending, but to do that, we need to come to terms with what’s in this book.
Frank Miniter is the author of Kill Big Brother, a novel that shows how we can keep our freedom in this digital age. He is also the author of The Ultimate Man’s Survival Guide—Recovering the Lost Art of Manhood, a New York Times bestseller, and This Will Make a Man of You—One Man’s Search for Hemingway and Manhood in a Changing World. Miniter is a contributor to Forbes and he writes for many other publications. He is also a constant commentator on national radio and television shows.