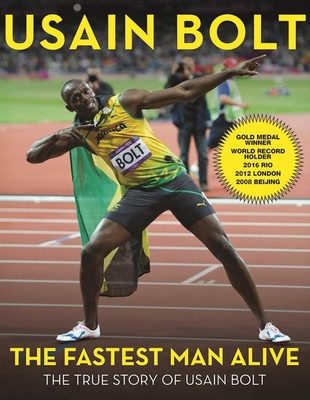 
Years before he set world records for the 100-meter and 200-meter sprints, which made him the fastest man alive and famous, Usain Bolt was a fairly scrawny kid from Trelawny in Jamaica. In this autobiography, Bolt himself shares how, as he grew up and played cricket and soccer, he— and others—learned he could run fast. Very, very fast.

Usain Bolt’s journey from a kid with humble beginnings to an Olympic gold medal winner is an inspiring and encouraging story. This beautifully illustrated autobiography shares that story from Bolt’s perspective. It is a celebration of someone who was inspired by other athletes around the world, someone who worked for years to become the best at his sport. Bolt shares stories of the sacrifices he made, the influence of Cristiano Ronaldo, the power of soccer and dancehall music, and his signature lightning bolt move.

Usain St. Leo Bolt is a thirty-year-old phenomenon. At the 2008 Summer Olympic Games, he won gold in the 100-meter (9.69 seconds), the 200-meter (19.30 seconds), and the 4x100-meter relay (37.10 seconds), becoming the first man to win three sprinting events at a single Olympics since Carl Lewis in 1984. More astonishingly, Bolt is the first man to set world records in all three events at a single Olympics. At the 2012 Summer Olympics in London, he defended his 100-meter and 200-meter titles, winning gold in both events, shattering the Olympic record in the 100-meter (9.63 seconds), and becoming the first Olympian to win back-to-back sprint doubles. In 2016, in Rio, he extended the winning streak by capturing his third gold medals in the 100-meter final, 200-meter final, and 4x100-meter relay. He lives in Jamaica.