Tales from the Indianapolis Colts Sideline: A Collection of the Greatest Colts Stories Ever Told (Tales from the Team) (Hardcover) 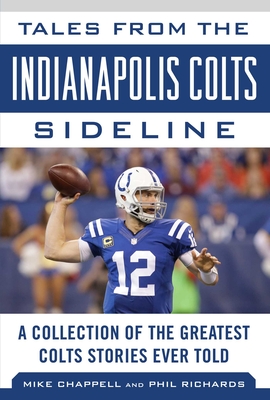 With roots that go back to 1953, the Indianapolis Colts are one of the most storied franchises in the NFL. But the modern legacy of achievement began in 1984 when the Colts arrived in Indianapolis after a midnight escape from Baltimore. More than thirty years later, the Colts have forged an identity as one of the most dynamic, power-driven teams in football today.

Now diehard Colts fans can relive all the struggles, all the passion, and all the glory of Indianapolis football in this newly revised edition of Tales from the Indianapolis Colts Sideline. Indiana sportswriters Mike Chappell and Phil Richards take readers inside the Colts’ Indiana Farm Bureau Football Center; onto the Lucas Oil Stadium sidelines; into the huddle; and inside the decisions, the strategies, the players, and the personalities that have made the Colts one of the NFL’s most exciting teams. They pay homage to Peyton Manning, Marvin Harrison, Dwight Freeney, and all the players who propelled the team to its Super Bowl victory following the 2006 season. And they look ahead as Andrew Luck and company attempt to bring home another title.

This is the book for football fans that bleed Colts blue

Mike Chappell has covered the Colts since their relocation to Indianapolis in 1984. He retired from the Indianapolis Star in 2014 but has continued to provide Colts content for various Indianapolis media outlets, the most recent being CBS4 and FOX59. He was on hand for their first training camp in Anderson, Indiana, their first regular-season victory, and their 29–17 win over the Chicago Bears in Super Bowl XLI that delivered a world championship to Indianapolis. He is a member of the Indianapolis Sportswriters and Sportscasters Hall of Fame.

Phil Richards retired in 2014 after thirty years with the Indianapolis Star. He covered the Colts from 1999 through 2013 and through most of those years wrote the cover story for the Star’s Colts Weekend sections. He is a member of the Indiana Sportswriters and Sportscasters Hall of Fame.