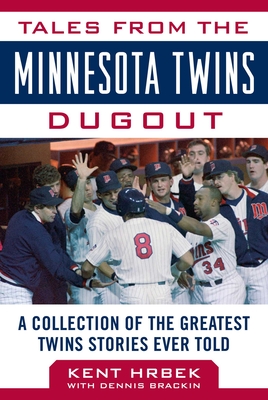 By Kent Hrbek, Dennis Brackin (With)


Not currently available
In this newly revised edition, Twins superstar Kent Krbek relives his journey from homegrown dreamer to major league superstar. He recounts all the unforgettable moments from on the field and in the locker room, including stories of Kirby Puckett, Tom Brunansky, Tom Kelly, Harmon Killibrew, and more.

Imagine a story in which a young man grows up so close to a major-league ballpark that he can see the stadium lights from his front yard. He pretends to be the team’s star during neighborhood ball games and fantasizes about one day playing for his hometown team. Stop imagining. Kent Hrbek made those childhood dreams come true.

Hrbek played fourteen seasons for the franchise, helping the club win two World Series titles. His jersey has been retired by the Twins, hanging alongside the likes of Tony Oliva, the hitter he emulated as a child. It is a fairytale story. But it’s only one part of this newly revised edition of Tales From the Minnesota Twins Dugout. Within these pages, readers will find the story of players’ hopes, realities, and unforgettable moments. Enjoy the humorous tales of pranks pulled by Hrbek and his zany teammates, taste the victory as the Twins take home two World Series titles. Savor the story of the hometown hero who remains to this day fiercely loyal to his Twins. A must-have for any Minnesota fan.

Whether you are a New York Yankees fan or hail from Red Sox nation; whether you are a die-hard Green Bay Packers or Dallas Cowboys fan; whether you root for the Kentucky Wildcats, Louisville Cardinals, UCLA Bruins, or Kansas Jayhawks; whether you route for the Boston Bruins, Toronto Maple Leafs, Montreal Canadiens, or Los Angeles Kings; we have a book for you. While not every title we publish becomes a New York Times bestseller or a national bestseller, Sports Publishing is committed to publishing books on subjects that are sometimes overlooked by other publishers and to authors whose work might not otherwise find a home.
Kent Hrbek is a former Twins first baseman and host of Kent Hrbek’s Outdoors. He played for the Twins for fourteen seasons and received World Series rings when the Twins took the title in 1987 and 1991. He is known for his humanitarian efforts and charity work for Lou Gehrig's disease.

Dennis Brackin is an award-winning sports writer and Twins fan who has covered the Twins for the Minneapolis Star Tribune.