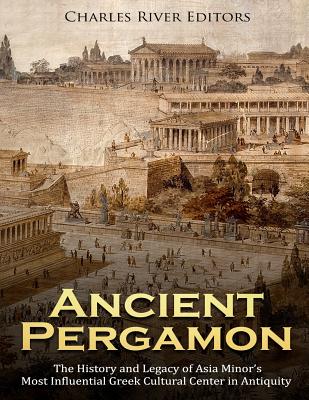 *Includes pictures
*Includes ancient accounts
*Includes online resources and a bibliography for further reading
The Library of Alexandria was one of the few libraries in the ancient Greek world, which helped ensure that mathematicians, scientists and other scholars from across the Mediterranean traveled to Egypt to study there, and it was so impressive in its size and influence that it left an indelible mark on the world that still reverberates today. At the same time, the importance of such a library meant Alexandria was not the only city with one, which is why the Ptolemies carried their patronage of the arts and the desire for Alexandria to be the cultural center of the Hellenistic world to a whole new level when they banned the export of papyrus - the paper-like reed that was used to compose books in the ancient world - from Egypt (Erskine 1995, 46).
At the time, the Ptolemies were not the only Greek kings with a great library in their capital, because the Attalid dynasty of Pergamon also built a library as a testament to Hellenism (Fox, 2001, 393). The Library of Pergamon was established slightly later than the Library of Alexandria, during the reign of king Eumenes II (197-158 BCE) (Thorton 1941, 12), but Eumenes embarked on a program to stock the Library of Pergamon with some of the greatest works of Greek literature in order to rival the Library of Alexandria (Canfora 1989, 46). For example, a complete set of Demosthenes' works was among the classics that graced the shelves in the Pergamon collection (Canfora 1989, 45). This competition seems to have been the basis for the papyrus ban, as the Ptolemies intended to halt academic work in Pergamon, such as editing new editions of the classics. While the Ptolemaic ban on papyrus may have slowed operations at the Library of Pergamon, the introduction of parchment as a medium of writing helped re-stock Pergamon's Library (Thorton 1941, 12). Ultimately, however, despite being considered a great institution of the ancient world in its own right, the Library of Pergamon never approached the size or influence of the Library of Alexandria, making it the loser in the heated competition for academic and cultural prestige.
Pergamon (or Pergamum) was a rich and influential ancient city in Aeolis, a major and important district, located on the western coast of Asia Minor. Pergamon was located around 25 kilometers from the Aegean Sea in modern-day Bergama, located in the Izmir Province of Turkey. The city of Pergamon is located on a hilltop in the valley of the river Kaikos, 1,000 ft. above sea level. On the north, the city is surrounded by mountains, while on the east and west, it is surrounded by two major tributaries, the rivers Selinos to the east and Ketios to the west. According to many historians and archaeologists, the city of Pergamon had enormous strategic value, since it overlooked the Caicus River Valley (Bakır ay in modern Turkey), which provided essential access from Pergamon to the Aegean Coast.
Pergamon reached the height of its power during the Hellenistic period, becoming the capital of the Attalid kings, which ruled during the 3rd and 2nd centuries BCE. During the Roman period, the city was the first capital of the Asian province, but it ultimately lost this status to its local rival, Ephesus.
Thanks to its royalty-decreed monopoly on parchment fabrication ("pergamon" in the Ancient Greek language) and tissues and its transnational commercial activity, the city became an important multicultural center for the entire empire. Furthermore, the city was decorated with gigantic monuments which gave urbanism a new start, competing with the two other important Hellenic centers, Alexandria and Antioch.
Ancient Pergamon: The History and Legacy of Asia Minor's Most Influential Greek Cultural Center in Antiquity examines the history of one of the most important Greek cities.