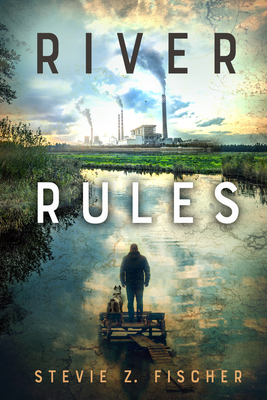 River Rules is a small-town suspense novel with a deep heart and powerful conscience. What the housing bubble didn’t break in Bridgeville, a small New England community blessed by the Connecticut River, greed, double-dealing and rapid-fire change just might. Peter Russo, a part-time farmer and full-time rambler with his rescue dog, has a knack for conflict and a burning desire to protect Bridgeville’s land and water from exploitation.

His best buddy, John Tomassi, a local cop, doesn’t want to be his babysitter nor does his brother, Jeff. Peter’s ex-lover, Carmen, has no use for him as she double-downs on her profitable apple orchard, but Rachel, his niece, needs his partnership in a food truck. Peter’s trouble with Bridgeville’s bureaucracy reunites him with two of his former club baseball players, Marco Torres, now on the wrong side of the law, and Kenny Johnson, a young cop. Peter’s helping hand not only gives Marco the chance he needs, but Marco and Kenny find that there’s more that connects them than divides them. The food truck is a lifeline to almost everyone except Nancy, Peter’s old friend, sinking fast from health issues and the aftermath of date rape.

Nobody’s famous and nobody’s rich except Brock Saunders, a local bully turned Ponzi-schemer and sexual predator. With Bridgeville life at the mercy of cultural crosswinds and economic forces seemingly beyond control, love, loss, baseball, and the search for truth create a spinning wheel of unexpected alliances, unsung heroes and treachery.

Stevie Z Fischer writes about the interplay of people, nature and power in small-town New England. Her first novel, River Rules, looks at how everyday heroes can be forged as lives are changed by forces seemingly beyond our control. Stevie’s focus on the bonds of friendship, love of nature and refusal to be marginalized shines through in River Rules. Although she has worked in jobs ranging from cheese slicing to strategic analysis, nothing has been so transformational as paying attention, walking her dog and never meeting a stranger. Stevie teaches writing and lives in Connecticut.

"A colorful cast of characters unites to stop one of their own from exploiting a small New England town’s land and water.
Brock Saunders is a blight on the community of Bridgeville, Connecticut. After ripping off the town’s farmers with a Ponzi scheme, he moved into the shadows, helping to facilitate the construction of an eyesore fuel-cell site and working as a consultant for the “New England Council Consortium,” an organization out to monetize the land at the expense of its people. Peter Russo knows well what it’s like to run afoul of Brock. Not only did he rob Peter’s brother and father, but he also raped his dear friend Nancy, an assault she has never gotten over. Though still quite active in his 50s, Peter will have to look to his friends, family, and fellow townsfolk for aid as a conspiracy by Brock and the consortium to sell the area’s water rights to the huge company Eautopia is slowly uncovered, a plot that the group is willing to kill to protect. Despite the high stakes of Fischer’s debut thriller, the book is often quite lighthearted. Peter’s “revenge” on Brock includes merely planting flowers around the ugly power station, and he’s aided in his fight with colorful characters ranging from a part-time private investigator, yoga-obsessed British ex-police officer to an obnoxiously loud ambulance chaser of a lawyer. Peter’s other allies are fully drawn individuals dealing with many of the modern challenges familiar to small communities; his niece, Rachel, is attempting to stay clean after opioid addiction; his ex Carmen, whom he still holds a torch for, lost her daughter to similar challenges; and most of the community suffers under a bureaucratic kleptocracy that isn’t answerable to its neighbors. Chapters are short but never rushed, and the dialogue is natural and funny, slang-filled and prone to friendly swearing and good-natured insults between close friends. As with any small town, there’s a lot of history to cover both about the area and among the characters, but even this is introduced organically, with details left to be fleshed out later on, feeding the story’s intrigue.
Modern economic scheming versus provincial loyalty makes for an endearing thriller." — Kirkus