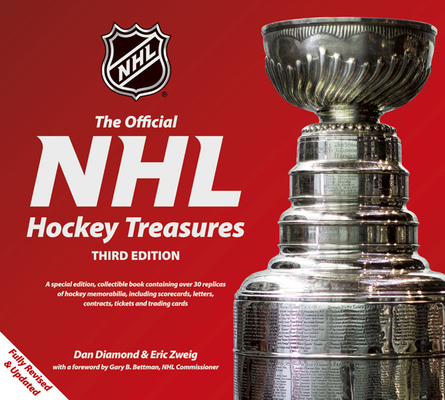 By Dan Diamond, Eric Zweig, Gary B. Bettman (Foreword by)
Email or call for price.
Hard to Find

Updated to include the 2012-13 season and the 2014 Winter Olympics, this new edition of The Official NHL Hockey Treasures tells the fascinating history of the sport through hundreds of photographs and an exhaustively researched text. As always, it covers the great players and games, but this title really scores with its awe-inspiring collection of 30 interactive facsimiles of hockey memorabilia--inserted right into the book The artifacts include 90-year-old newspaper reports from the NHL's first games, letters from the President of the NHL, player contracts (including Gordie Howe's deal to play with his two sons on the Hartford Whalers), collectible hockey cards, and much, much more. Hockey fans will treasure this forever.

Dan Diamond, the doyen of the National Hockey League writers, includes in his impressive portfolio the NHL Official Guide & Record Book (Triumph Books), Total Hockey (Total Sports), Total NHL (Triumph Books), Total Stanley Cup (Triumph Books), Hockey Rules! (Somerville House), and The Ultimate Prize: The Stanley Cup (Andrews McMeel). He has also compiled media guides for the NHL All-Star Game, NHL Entry Draft, Winter Olympics, the FIFA World Cup, and the Toronto Blue Jays baseball team. He lives in Toronto. Eric Zweig has worked with Dan Diamond on the NHL Official Guide & Record Book (Triumph Books) and other publications. He is also the author of nearly 30 other books about sports and sports history, both fiction and nonfiction, for adults and children. Eric is a member of the Society for International Hockey Research and the Society for American Baseball Research. He also lives in Toronto.