Snooker Legends: On the Road and Off the Table With Snooker's Greatest (Paperback) 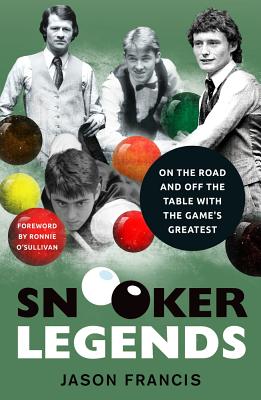 By Jason Francis
Email or call for price.
Out of Print

Jason Francis is the man who created the Snooker Legends Tour and who's been at Ronnie O'Sullivan's side on tour for the past 6 years. This is his story, sharing tales on the road with "the Rocket" and some of the game's greatest ever snooker legends like Jimmy White and Stephen Hendry. From his initial idea, to meeting and staging the last ever snooker show with Alex "Hurricane" Higgins to taking over the World Seniors Tour, Jason reveals what he learnt about the players themselves and also the sport as it developed over the years under the guidance of Barry Hearn. Through his tour, Jason was at the center of it all, able to bring the former players together again to renew old rivalries and create new memories. He struggled against those in the game who didn't want him to succeed but never gave up. This is his story, a snooker fan's story.

Jason Francis grew up watching snooker on a TV that needed two shillings for the meter. He was fascinated by their characters, the bitter rivalries, and their seemingly rock star lifestyles. Jason wanted to be a snooker player, he wasn't good enough but years later found a way to get involved with the sport he loved.