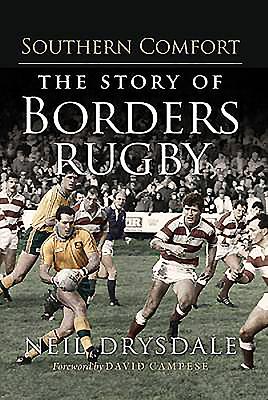 By Neil Drysdale
Email or call for price.
Out of Print

For the last 130 years, the Borders has produced a long line of international class rugby players, out of all proportion to the area's small population, and has long been considered the heartland of Scottish rugby. Featuring interviews with many of the leading luminaries of Borders rugby, Neil Drysdale uncovers the passion for rugby in the Borders, how players were encouraged to play rugby by their mentors at Hawick, Gala, Melrose, Selkirk, Kelso and elsewhere, and gathers their thoughts on the future of the game in the region. In many ways, this book is a microcosm of Scottish rugby as a whole - the two Grand Slams of 1984 and 1990 were built around men from the South of Scotland, while the failure of the Border Reivers coincided with a dark period for the sport in Scotland - and seeks to discover why so many Lions legends from Jim Telfer and John Rutherford to Roy Laidlaw and Gary Armstrong, emerged to enhance the game without ever forgetting their roots. Including interviews with Doddie Weir, Craig Chalmers, Peter and Michael Dods, John Jeffrey and a host of other great as well as previously unsung heroes from behind the scenes, Southern Comfort reveals the different passions, hunger, humour, comradeship and local rivalries which fuels the region's love for rugby - and tells a story of how the South has risen above adversity to still produce the stars of the future.

Neil Drysdale has been involved in journalism since the late 1980s when he began writing for"Scotlandon Sunday." Since then, he has covered many of sport's biggest events, including the 1995 Rugby World Cup inSouth Africaand the 2000 Sydney Olympics, and has watchedScotland's rugby team achieve heroic victories and suffer agonizing defeats fromEdinburghtoDunedinandPretoriato the Parc des Princes. He has written several books, including the best-selling biography of the Scotland and Rangers manager, Walter Smith, an acclaimed biography of the motor racing star Dario Franchitti, and a much-praised account of Freuchie's march to Lord's in 1985. He currently writes for"The Herald"and lives inAberdeenwith his wife, Dianne. David Campese, born in New South Wales in 1962, is a former Australian rugby union player."