Bananas!: How The United Fruit Company Shaped the World (Hardcover) 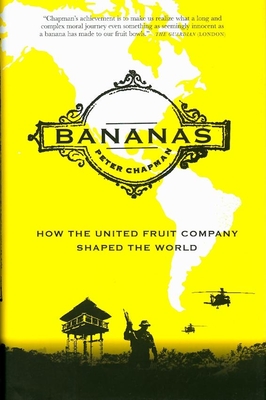 "If you only read a handful of nonfiction books this year, Bananas ] is among your recommended five portions." --The Observer In this gripping exploration of corporate manuevering and subterfuge, Peter Chapman shows how the importer United Fruit set the precedent for the institutionalized power and influence of today's multinational companies. Bananas is a sharp and lively account of the rise and fall of this infamous company, arguably the most controversial global corporation ever - from the jungles of Costa Rica to the dramatic suicide of its CEO, who leapt from an office on the forty-fourth floor of the Pan Am building in New York City. From the marketing of the banana as the first fast food, to the company's involvement in an invasion of Honduras, the Bay of Pigs crisis, and a bloody coup in Guatemala, Chapman weaves a dramatic tale of big business, political deceit, and outright violence to show how one company wreaked havoc in the "banana republics" of Central America, and how terrifyingly similar the age of United Fruit is to our age of rapid globalization.