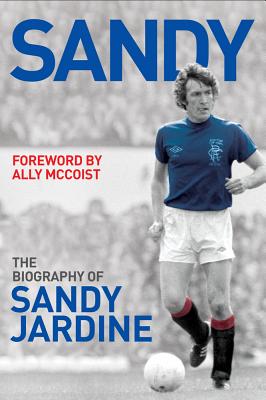 William Pullar Jardine is an lbrox icon. Known as "Sandy" to his legions of fans, Jardine joined Rangers in 1964 and went on to make 674 appearances for the Govan Club. Born in Edinburgh, Sandy Jardine grew up near Tynecastle Park, the home of Heart of Midlothian FC, the team he supported as a boy. But as his footballing talents emerged as a teenager he was signed by Rangers and made his debut against Hearts at the age of 18. He soon became an integral part of the Rangers team and became a club legend when the Barcelona Bears won the UEFA Cup in 1972. Ten years later, Jardine fulfilled another personal dream when he signed for Hearts and his impact there was immense as they won promotion in their first year and narrowly missed out on the Premier League title in 1986 in a nailbiting finale. He also managed Hearts before returning to Rangers to work in PR. As Rangers went into financial meltdown in 2012, nobody did more to galvanize the club than Sandy Jardine. In April of that year he led a march of 8,000 Rangers fans to Hampden to register a protest against the SFA who had imposed a series of sanctions against the stricken club. But in late 2012, Sandy announced that he was battling cancer, a fight he lost in April 2014. He had played more than 900 competitive games for Rangers, Hearts and Scotland and epitomized everything that was good about football in its halcyon days, so much so that Rangers even renamed the Govan Stand at lbrox in his honor. This biography of Sandy Jardine is the definitive work on a man who became a footballing legend.

Tom Miller has a wealth of experience reporting and broadcasting on Scottish football and has worked for Rangers TV as their match commentator for the last seven years. Tom can also be regularly heard on talkSPORT and Radio Clyde and was previously involved in that iconic football show Scotsport.