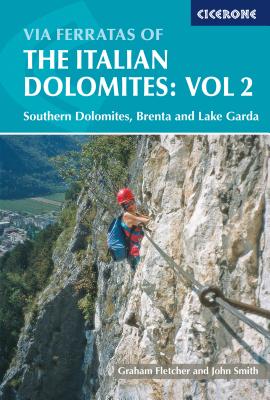 This guidebook, Via Ferratas of the Italian Dolomites Volume 2, is the second in a series of two published by Cicerone Press, which now fully replaces the previous Cicerone guidebook, Scrambles in the Dolomites, adding many new routes through the southern, Brenta and Lake Garda areas.Volume two documents southern Dolomites Via Ferrata routes in the major mountain ranges of Civetta, Schiara and Pala as well as those to the west in the Brenta. A significant addition (and, as far as we are aware, not previously published in any English-language guidebook) is the inclusion of routes around the northern end of Lake Garda and the Piccole Dolomites north of Vicenza. Here the mountains are generally lower and you can enjoy ferrata climbing over a much extended season, with some routes accessible for most of the year. While volume one covered the eastern, northern and central areas of the Dolomites, book two completes the picture, focusing on the southern, Brenta and Lake Garda areas.

John Smith has been walking and climbing mountains around the world for around 30 years. He has a passion for the area and Via Ferratas, and this volume is the result of many enjoyable days in the Dolomites. Graham Fletcher started climbing over 30 years ago. After a busy professional career, he took early retirement and has now returned to climbing.