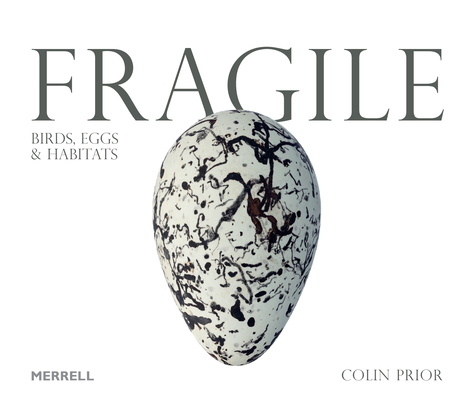 Birds' eggs are true wonders of the natural world: they are strong enough to protect the embryo as it grows and to withstand incubation by the parent, yet sufficiently fragile to allow the chick to hatch. Little wonder that the enormous diversity of avian eggs - the amazing range of shapes, sizes, colours, textures and patterns - has long fascinated us. Since boyhood, the renowned landscape photographer Colin Prior has had a passion for wild birds. For him, birds are the embodiment of nature, and fundamentally enrich the experience of being outdoors. This stunning new book presents Prior's remarkable images of birds' eggs side by side with his dramatic photographs of the birds' natural habitats. At a time when many human influences are having an adverse impact on the environment, these habitats are equally fragile and vulnerable to change. Loss of habitat is, in turn, a major factor in the decline of wild bird populations.

It has been illegal to take any birds' eggs from the wild in Great Britain since 1954, and since 1982 it has been against the law to possess the egg of any wild bird. The eggs featured in this book belong to the National Museum of Scotland in Edinburgh, which holds one of the world's largest collections of birds' eggs. The eggs were collected legally during the late 19th and early 20th centuries and bequeathed to the museum by private collectors. Prior set up a studio at the museum and spent five weeks photographing more than 300 eggs using the latest digital technology. Each photograph is a compilation of between 40 and 80 separate exposures that were then blended into a single image using specialist software. The final image is an exquisite, almost three-dimensional rendition of the egg, pin-sharp from the front to the back. The eggs vary in size from that of the tiny goldcrest, the UK's smallest bird, to that of the mute swan.

In his introduction, Prior describes how his love of the natural world was nurtured by the endless hours he spent in the countryside around the Glasgow suburb where he grew up; how he overcame the technical challenges of photographing the eggs; how the featured eggs were selected from the museum's collection; and how the photography of each bird's habitat was completed. In his essay, the Scottish environmentalist Professor Des Thompson reflects on the state of nature and the relationship between nesting and habitats. In the main part of the book, the birds' eggs are arranged into chapters according to the species found in a particular habitat, such as 'Mountain and Moorland' and 'Seashore and Estuary'. The caption beneath each egg details the common and scientific name of the bird, the date the egg was collected, the size of the clutch, and the egg's dimensions. Each egg is presented in a diptych with a photograph of the bird's habitat, painstakingly captured at a time of year when the dominant colours of the landscape most closely resemble those of the egg. Fragile - the culmination of ten years' work - not only showcases the inherent beauty of birds' eggs, but also serves as a powerful reminder to protect the birds' natural habitats and thereby the birds themselves.