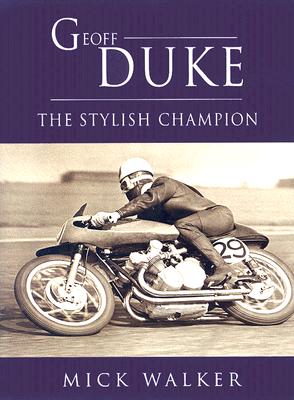 This, the fifth in a series aimed at covering the careers of the world's greatest motorcycle champions, highlights the man who was the first post-war superstar on two wheels, Geoff Duke. Geoff Duke: The Stylish Champion is the story of the man who set new standards and dominated the World Championship scene, first on British Nortons and later Italian Gileros during the first half of the 1950s, gaining six titles in all. Duke was the first man to win three 500cc world titles in succession, the first motorcyclist to win the coveted Sportsman of the Year award, and only the second motorcyclist to be honored with an OBE. Additionally, he set new standards of smoothness which were to remain unsurpassed to the present day and pioneered the use of a one-piece leather racing suit. Upon his retirement from racing at the end of 1959, he was to remain closely involved in the sport and at various times carried out the tasks of consultant, team manager, clerk of the course - he was a true ambassador. Geoff Duke: The Stylish Champion is lavishly illustrated with many previously unpublished photographs making it a must-read for any motorcycling fan.

A leading authority on all forms of motorcycle sport, Mick Walker has been a successful racer, tuner and team manager, and still rides regularly. He was a former editor of Motorcycle Enthusiast, and published over 100 books including in this series, Derek Minter: The King of Brands, Geoff Duke: The Stylish Champion, Bob McIntyre: The Flying Scot and Mike Hailwood: The Fans' Favourite.