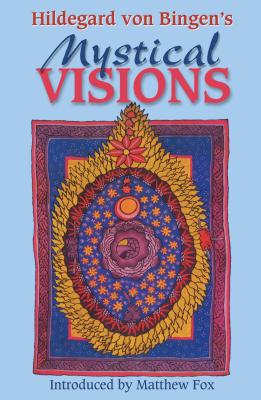 
Usually ships to store in 2-3 Days
Twelfth-century Rhineland mystic Hildegard von Bingen records her exquisite encounter with divinity, producing a magnificent fusion of divine inspiration and human intellect. Hildegard von Bingen’s Mystical Visions is perhaps the most complete and powerful documentation of mystical consciousness in recorded history. Now after 800 years, these visions are again available for those seeking to reawaken mystical consciousness.
Bruce Hozeski, Ph.D., is Chair of the English Department at Ball State University and specializes in Medieval British literature, dialects, Old English language & literature, Hildegard von Bingen, and honors humanities. He is the author of five books about Hildegard von Bingen and is a major contributor to the annual annotated Chaucer Bibliography.

Matthew Fox was a member of the Dominican Order in good standing for 34 years until he was expelled by former Pope Joseph Ratzinger, who was a cardinal and chief inquisitor at the time. Matthew Fox is the founder of Wisdom University (formerly the University of Creation Spirituality) and the foremost proponent of Creation Spirituality, based on the mystical teachings of early Christian visionaries such as Hildegard von Bingen, Meister Eckhart, and Saint Thomas Aquinas. He is the author of 26 books, including Original Blessing and The Coming of the Cosmic Christ. In 2019, Matthew Fox was cited as one of the "100 Most Spiritually Influential Living People in the World" according to Watkins Mind Body Spirit magazine.
"Bruce Hozeski's translation succeeds admirably in accommodating the twelfth-century perspective and Hildegard's own unique worldview in terms that are approachable."
— Gnosis magazine