Omar! My Life on and Off the Field: Memoirs of a Gold-Glove Shortstop (Paperback) 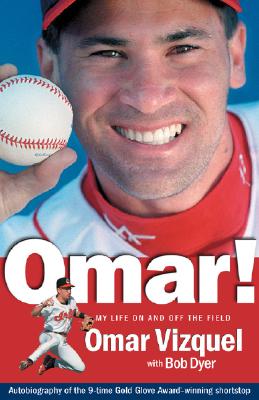 "Offers a superb glimpse into the life of a master sports player and is highly recommended for baseball fans everywhere." -- Midwest Book Review

All-star shortstop Omar Vizquel tells the story of his life in baseball, from the sandlots of Caracas, Venezuela, to Game Seven of the World Series and beyond. It's a a candid look inside the locker room of those powerhouse Indians teams of the late 1990s, from one of the best shortstops ever to play the game.

You don't have to be a baseball fan to be an Omar Vizquel fan. Omar doesn't just make the tough plays look easy. He makes the toughest plays look fun. Widely considered one of the best defensive shortstops in the history of baseball, he is often praised by teammates, opponents, and fans alike for working so hard at his game--and for obviously enjoying it so much.

His hard work has paid off. Omar won an amazing nine consecutive Rawlings Gold Glove Awards and holds the highest career fielding percentage of anyone at the position. He has been selected for three American League All-Star teams, has played in two World Series.

Includes a postscript by the author commenting on the controversial responses to the hardcover edition by Albert Belle and Jose Mesa.