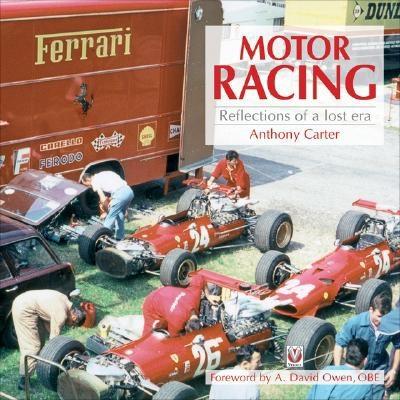 By Anthony Carter
Email or call for price.
Hard to Find

The British motorsport scene has always been renowned for brave innovation and this was certainly the case during the exciting time described by this book. An enthusiast's reflective pot-pourri, in words and intimate paddock scenes, photographed in black and white and color beginning from the mid 1950s and through the 1960s, when motor racing was still accessible to all, and, finally the 1970s when overt sponsorship and television changed the sport for ever. A defining era. Illustrated with 300 extensively captioned, many previously unpublished photographs. Including continental race circuits, the cars and the personalities. Essential reading for any true motorsport fan.

The author began writing about motor racing, Grand Prix racing in particular, after he retired from a career in the insurance industry in London. He has followed the sport since childhood and took many photographs as a young man which were published by Veloce in 2005, revised and reprinted in 2007 - 'Motor Racing. Reflections of a Lost Era'. Contributions to other works followed. The author built up an intimate knowledge of the sport and it's personalities at a time when it was open to the enthusiast. Access to the paddock was always possible and the author has since been privileged to draw upon the experiences of numerous personalities he came to recognize all those years ago. That knowledge has been put to good use in these pages.

"Nostalgia and a historically important archive of personal recollections and pictures has been preserved in a way that will awaken the memories of many older enthusiasts. At the same time this fascinating book will inform a younger generation ..." – Cotswold & Vale Magazine

Mazda has built a great racing history over the last 40 years, in large part because the company has always had a sense of motorsport's history, and Mazda drivers tend to connect with racing history in a way that other modern car drivers just don’t.

So to feed the need, Veloce Publishing in the UK has a great library of books that cover all kinds of cars, and this hardback coffee table book makes a great addition to any sports car nut’s library. The story in the book is a nostalgic trip back to an era of motor racing in Great Britain and Europe when the sport was less commercial, much more accessible, and much more dangerous.

This book covers the years 1956 to 1979 in Grand Prix racing – the heart of what is now considered the golden age of Formula 1. But what is really special about this book is the set of photos. Almost every page features candid pictures that have not been published before. They were all taken by the author, without the benefit of a press pass or special access, and were never intended to be published. The images are mainly of paddock scenes and the people – drivers, mechanics, course officials, even the man who painted the racing numbers on the cars – preparing for action behind the scenes. Carter ties the photos together with his personal account of racing in those years, which makes this book a true keeper.

“The particular charm of this book comes with the author’s relating his early experiences … Added is the book itself, which is a beautiful production with the end papers a special treat.”