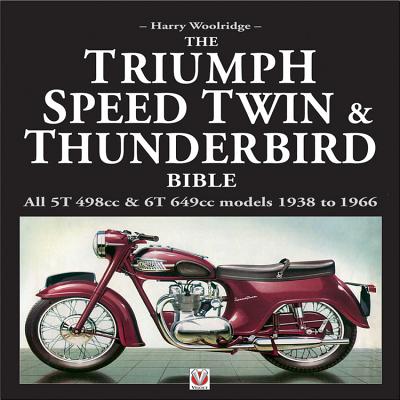 By Harry Woolridge
Email or call for price.
Out of Print

A complete technical development history of the Triumph Speed Twin and Thunderbird motorcycles. As a reference, this book will be an invaluable asset for anyone aiming to restore a Speed Twin or a Thunderbird to the correct specifications. Used as a guide, it will enable a potential buyer or owner to establish the exact year of manufacture and identify the precise model type.

After National Service in the Royal Air Force Harry Woolridge applied for a job in the Service Department at the Triumph Engineering Company, and was lucky enough to be selected. Thus began a working relationship with Triumph and its motorcycles that would last thirty years: an experience Harry says he would not have missed at any price. After a few years in the Service Department, Harry joined the team in the Experimental department until he was promoted to the position of Assistant Quality Control Manager. Later, in a reshuffle of titles, he became Inspection Foreman for Motorcycle Assembly and Production Development. With the formation of the Meriden Co-operative, Harry served as Warranty/Service Manager until the factory closed in 1983.