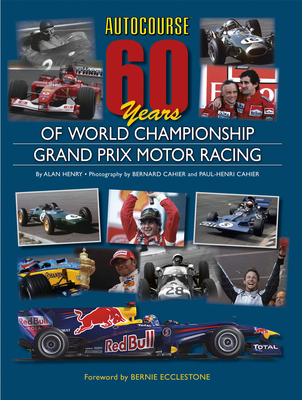 By Alan Henry
Email or call for price.
Hard to Find

This book tells the story of the globally successful FIA Formula 1 World Championship from its roots before the Second World War to the present day. Early chapters cover the growth of motor sport from the first recorded race in 1894 through the 1990s. Despite the credit crunch and worldwide recession Formula 1 has still managed to retain its position as a powerful global sport as the calendar heads towards a twenty race season.

Alan Henry is one of the most respected F1 journalists, and has built up good relationships with most of the sport’s leading personalities over the years. He is currently Grand Prix Editor for Autocar and regular Formula 1 columnist for The Guardian. His numerous books include a good number over the years for Haynes, including Jenson Button: A World Champion's Story and co-authorship of Stirling Moss: All My Races.

"This 400-page book is a lot more than a coffee table picture book. In-depth text is by British motoring journalist Alan Henry. Wonderful photos, many of them utterly new to me, are by Bernard and his son Paul-Henri Cahier" - Road & Track

"Autocourse: 60 Years of World Championship Grand Prix Motor Racing, new from Motorbooks / Icon Publishing, is a lavishly-illustrated account of the globally successful FIA Formula 1 World Championship from its roots before World War II to the present day. After the war came the glamorous era of the winning Alfa Romeos, followed by stunning victories from Ferrari and Maserati in the 1950s maintaining the Italian tradition before mighty Mercedes captured the crown; along the way technological advances causing several re-inventions. The book follows the action in over 500 images evoking the drivers - the great Michael Schumacher gets his very own chapter – cars, circuits, personalities and issues of each era. The back of the book contains a useful compendium of statistics, champions and more. With more and more countries vying with each other to gain the right to stage a Formula 1 contest, and as the calendar heads towards a twenty-race season, the book also looks forward to the megabucks sport's seventh decade as new teams arrive to take on the established giants." - Luxist.com