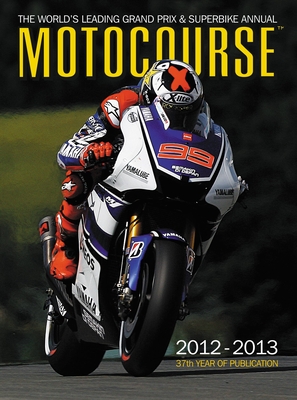 “The most important record of racing since before I was born.”
2011 World Champion Casey Stoner

Since the first edition in 1976, MOTOCOURSE has been called “the Bible of motorcycle racing.”

The 2012–2013 edition reinforces that great tradition. Now in its 37th year, continues to go from
strength to strength, recording in minute detail the whole of the MotoGP season, including the
Moto2 and Moto3 support classes.

MOTOCOURSE also features a round-by round review of the intensely competitive World
Superbike series, where BMW finally found the speed to challenge the might of Aprilia, Ducati,
Honda and Kawasaki, as the these mighty manufacturers battled for supremacy over 14 rounds
across the globe.

The book, edited by respected motorcycle journalist Michael Scott and his team of experienced
contributors, is not simply a lavish document of the MotoGP and World Superbike seasons, but a
highly collectable resource that is the cornerstone of every motorcycle racing enthusiast’s library.

MOTOCOURSE also has unique coverage of American road racing, public-road racing in Ireland
and at the classic Isle of Man TT, as well as the exciting British Superbike and traditional sidecar
championships

Michael Scott writes brilliantly about people, including the well-reviewed Barry Sheene: Motorcycle Racing's Jet-set Superstar, as well as biographies of Valentino Rossi and Wayne Rainey. He is a long-time MotoGP correspondent and the editor of the annual Motocourse series.

Neil Spalding writes about technical aspects of MotoGP for a selection of motorcycle magazines and newspapers throughout the world as well as for the Official MotoGP Season Review. He is also the author of the critically acclaimed book MotoGP Technology. When not at the circuits Neil runs Sigma Performance, which designs and sells slipper clutches for racing motorcycles.

Mat Oxley is an Isle of Man TT winner and lap record holder. He has been writing about motorcycle racing for magazines and newspapers since the late 1980s, and his books include acclaimed biographies of Valentino Rossi and Mick Doohan, plus the Cold War motorsport spy story Stealing Speed. His contribution to the Official MotoGP Season Review is a typically insightful summary of the season as a whole.