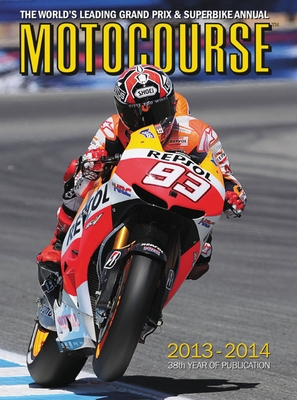 The World's Leading Grand Prix and Superbike Annual reaches its 38th year as the indisputable leader in its field, covering the world of motorcycle racing like no other publication. The 18-race MotoGP season is covered with its usual meticulous attention to detail as it also includes coverage of the Moto2 and Moto3 classes. The much-respected Michael Scott continues in the editor's role, supported by other leading writers in the sport who bring you the unique drama of the year's action in their reportage. Supporting the exhaustive race reports are the traditionally detailed results pages that include specially prepared and easy to follow lap charts. The 2013 season has seen the spectacular arrival of the prodigiously talented Marc Marquez who has taken on fellow Spaniards Dani Pedrosa and Jorge Lorenzo in a thrilling three-way title battle. Adding spice to the proceedings is fans favourite Valentino Rossi who returned to Yamaha and ended a two-year barren spell with an emotional 80th premier class win in the Dutch TT at Assen. Technical aspects of the MotoGP and CRT machines are analysed by Neil Spalding, whilst Matt Birt once more assesses relative performances of the MotoGP teams in his Team-By-Team review, which includes full team personnel and technical specifications of the machines, showcased in the beautiful illustrations by Adrian Dean. The sport's other leading category, the World Superbike Championship, is also given lavish coverage. Gordon Ritchie chronicles the 14-round series that began in February at Phillip Island, Australia and ended early in October at Jerez, Spain. A profile of the champion and details of all the riders and bikes are supported by complete results that are spread over a total of more than forty pages. To complete a jam-packed 296-page edition, MOTOCOURSE also includes the World Supersport series, the venerable Isle Of Man TT, the ferocious British Superbike Series, the Sidecar World Championship and Superbike racing in the USA. MOTOCOURSE traditionally wraps up the year with the most complete results record supplied anywhere in a single volume. This lavish yearbook continues to be essential reading for all fans of two-wheeled motorcycle racing worldwide.

Michael Scott writes brilliantly about people, including the well-reviewed Barry Sheene: Motorcycle Racing's Jet-set Superstar, as well as biographies of Valentino Rossi and Wayne Rainey. He is a long-time MotoGP correspondent and the editor of the annual Motocourse series.

Neil Spalding writes about technical aspects of MotoGP for a selection of motorcycle magazines and newspapers throughout the world as well as for the Official MotoGP Season Review. He is also the author of the critically acclaimed book MotoGP Technology. When not at the circuits Neil runs Sigma Performance, which designs and sells slipper clutches for racing motorcycles.

Mat Oxley is an Isle of Man TT winner and lap record holder. He has been writing about motorcycle racing for magazines and newspapers since the late 1980s, and his books include acclaimed biographies of Valentino Rossi and Mick Doohan, plus the Cold War motorsport spy story Stealing Speed. His contribution to the Official MotoGP Season Review is a typically insightful summary of the season as a whole.