All My Rivers Are Gone: A Journey of Discovery Through Glen Canyon (Paperback) 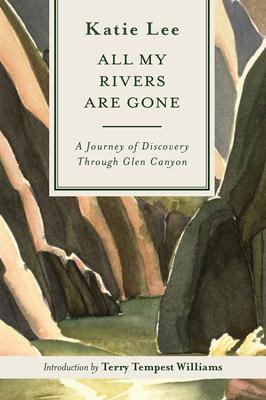 David Brower, who has always regretted the Sierra Club's failure to save the Glen Canyon, called it The Place No One Knew. But Katie Lee was among a handful of people who knew the 170 miles of Glen Canyon very well. She'd made sixteen trips down the river, even named some of the side canyons. Glen Canyon and the river that ran through it had changed her life. Her descriptions of a magnificent desert oasis and its rich archaeological ruins are a paean to paradise lost. In 1963, the US Government's Bureau of Reclamation (the "Wreck-the-Nation Bureau", Katie calls it) shut off the flow of the Colorado River at Glen Canyon Dam, beginning the process of flooding this natural treasure. Three generations have been born since the dam was built, and in a few more decades there may be no one alive who will have known the place. Katie Lee didn't forget Glen Canyon, and she didn't want anyone else to forget it either. She tells us what there was to love about Glen Canyon and why we should miss it. The canyon had great personal significance for her: She had gone to Hollywood to make her career as an actress and a singer, but the river kept calling her back, showing her a better way to live. She eloquently weaves her personal story into her breathtaking descriptions of the trips she made down the canyon. In later years, Katie found allies in her struggle to restore the canyon. The Glen Canyon Institute has been joined by the Sierra Club in calling for the draining of Lake Powell ("Rez Foul", in Katie's words), and the idea is being debated on editorial pages across the country and in congressional hearings. All My Rivers Are Gone celebrates a great American landscape, mourns its loss, and challenges us to undo the damage and forever prevent such mindless destruction in the future.

Katie Lee, in her 60-year career in the entertainment industry, was an author, musicologist, folk singer, storyteller, Hollywood actress, song writer, filmmaker, photographer, poet, and river runner. She was active in environmental causes ever since the destruction of her beloved Glen Canyon. Her first book, Ten Thousand Goddam Cattle, tells the story of the American cowboy in song, verse, and story. All My Rivers Are Gone: A Journey of Discovery Through Glen Canyon reveals her personal connection with the Colorado River and the fight to stop the building of the Glen Canyon Dam. Her documentary, "The Last Wagon," won the 1972 CINE Golden Eagle Award. In 1997, she was featured in the PBS documentary, "Cadillac Desert," based on Marc Reisner's acclaimed book. Her Colorado River songs and cowboy ballads are recorded on numerous albums and are available through Katydid Books and Music. She lived in Jerome, Arizona.