A Visitor's Guide to Mystic Falls: Your Favorite Authors on The Vampire Diaries (Paperback) 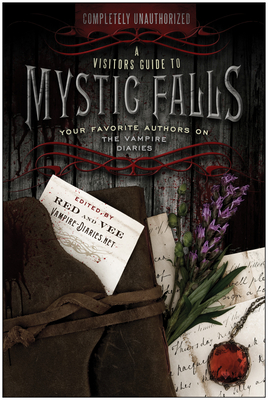 A Visitor's Guide to Mystic Falls: Your Favorite Authors on The Vampire Diaries (Paperback)


Email or call for price
The Vampire Diaries, the television series based on the iconic books by L.J. Smith, has already managed to captivate millions of viewers with its unique mix of immortal romance and very human drama.

In A Visitor's Guide to Mystic Falls, YA authors—led by Red and Vee of premier Vampire Diaries resource Vampire-Diaries.net—take a closer look at Mystic Falls: its residents (both alive and undead) and its rich, inescapable history.

• Claudia Gray delves into the events of 1864 and how they've shaped not just Mystic Falls but the success of the show itself
• Sarah Rees Brennan tells us what it takes for a girl to hold her own against a vampire boyfriend (or two), placing Elena squarely between fellow vampire-daters Buffy and Bella
• Jennifer Lynn Barnes takes Mystic Falls to task for poor treatment of Caroline Forbes
• Jon Skovron examines the male-female vampire dynamic, in history and in The Vampire Diaries
• Plus a guide to the book series for tv fans looking to visit The Vampire Diaries' literary inspiration, and more

Whether you're a new visitor or a long-time fan, you won't want to continue your tour of Mystic Falls without it.
Vee has been a Vampire Diaries fan since the series' original publication, when a classmate passed her a copy of The Awakening in seventh grade homeroom. She's a History major dropout, former military brat and preacher's kid, and can often be found at concerts. She currently resides in Arizona with her (patient, supportive, TVD fan) musician husband and a ridiculous amount of CDs, records, books, and DVDs.

Red has been a fan of the Vampire Diaries since 1993, when he found the series in Secondary School. He studied Literature at University, and is a keen amateur photographer who dreams of one day owning a DSLR camera (preferably in a sexy, matte black). Red is British and lives somewhere along the east coast of the United Kingdom, not far from the sea. He likes cats, funky socks and English Breakfast tea.

Red and Vee are co-editors of the popular site Vampire-Diaries.net. The site was established February 2009. The site averages around 500,000 unique visitors a month.

The site encompasses information on the books and TV show, includes an up-to-date news blog, a comprehensive Vampire Diaries wiki, a Media Gallery, and an active discussion forum. Vampire-Diaries.net also has more than 7,000 followers on Twitter.