The Scholar of Moab (Paperback) 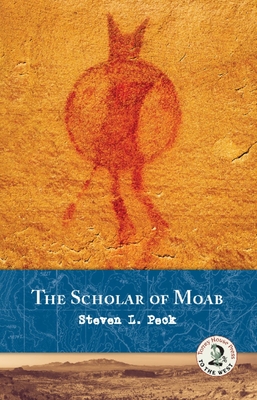 The Scholar of Moab (Paperback)


Usually ships to store in 2-3 Days
2011 Best Novel, Association for Mormon letters
Montaigne Medal Finalist "Steven Peck has imagined a world ever-so-slightly tweaked from this real one...The Scholar of Moab explores the otherworld of nature, imagination, and mind." --BROOKE WILLIAMS, author of Halflives What happens when a two-headed cowboy, a high school dropout, and a poet abducted by aliens come together in 1970s Moab, Utah? The Scholar of Moab, a dark-comedy perambulating murder, affairs, and cowboy mysteries in the shadow of the hoary La Sal Mountains. Young Hyrum Thayne, an unrefined geological surveyor, steals a massive dictionary out of the Grand County library in a midnight raid, startling the good people of Moab into believing a nefarious band of Book of Mormon thugs, the Gadianton Robbers, has arisen again. To make matters worse, Hyrum's illicit affair with Dora Tanner, a local poet thought to be mad, results in the delivery of a bouncing baby boy who vanishes the night of his birth. Righteous Moabites accuse Dora of the murder, but who really killed their child? Did a coyote dingo the baby? Was it an alien abduction as Dora claims? Was it Hyrum? Or could it have been the only witness to the crime, one of a pair of Oxford-educated conjoined twins who cowboy in the La Sals on sabbatical? STEVEN L. PECK knows Moab, inside out. An evolutionary ecologist at Brigham Young University, Peck teaches the philosophy of biology. His scientific work has appeared in American Naturalist, Newsweek, Evolution, Trends in Ecology and Evolution, Biological Theory, Agriculture and Human Values, Biology & Philosophy. Steven also co-edited a volume on environmental stewardship. His creative works include a novel, The Gift of the King's Jeweler (2003 Covenant Communications). His poetry has appeared in Dialogue, Bellowing Ark, Irreantum, Red Rock Review and other magazines. Peck was nominated for the 2011 Science Fiction Poetry Association's Rhysling Award. Other awards include the Meyhew Short Story Contest, First Place at Warp and Weave, Honorable Mention in the 2011 Brookie and D.K. Brown Fiction Contest, and Second Place in the Eugene England Memorial Essay Contest.
Steven L. Peck is an evolutionary ecologist at Brigham Young University where he teaches the philosophy of biology. His scientific work has appeared in numerous publications. As the Renaissance Man he is, Steve has won a fistful of awards for both his poetry and science fiction work.

Steven Peck has imagined a world ever-so-slightly tweaked from this real one, butwell, why wouldn’t conjoined twins have an independent consciousness, bumblebees be more dependent on faith than wings, and Einstein sing German nursery rhymes? The Scholar of Moab explores the otherworld of nature, imagination, and mind.”
—Brooke Williams, Halflives: Reconciling Work and Wildness

"It’s satire of the best sort: biting what it loves, snuggling up to what it hates."
—Scott Abbott, Professor of Philosophy and Humanities, Director of Integrated Studies, Utah Valley University

"Peck moves easily from the lyrical to the grotesque, and sets his multi-voiced tale in the ideal place: Moab, Utah--where red rocks and surprising arches provide the ideal backdrop for anything in or out of the world, including space ships and kidnapped babies."
—Margaret Blair Young, President: Association for Mormon Letters

"Peck convincingly merges the genre of magical realism with American West fiction by invoking the power of personal testimonynot his own, but by presenting the recorded testimony of his characters in letters, journals, poetry, and interview transcripts. Using these disparate voices, Peck concocts a strange and tragicomic brew of naivety, philosophy, faith, discovery, and loss."
—Blair Dee Hodges, Standing on the Promises, The Association for Mormon Letters