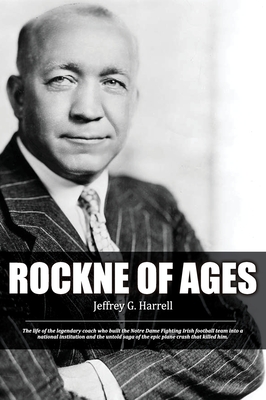 By Jeffrey G. Harrell
Email or call for price.
Usually Ships in 2-3 Days

On March 31, 1931, legendary Notre Dame football coach Knute Rockne and seven others were killed in a plane crash in a remote pasture near Bazaar, Kansas. The death of the greatest sports visionary in American history who shaped the game of football and, literally, the ball itself, was written off as an accident and forgotten for nearly a century.

"Rockne of Ages" conjures the long-lost spirit of Knute Rockne through a posthumous voice and a vast gallery of rare photographs to resurrect an American icon's legacy for a millennial audience starved for fresh insight into how the bricks were laid into the foundation of America's most popular sport.

Rockne's tragic death was mourned around the world. "Rockne of Ages" cuts to the chase of events leading up the crash - beginning on June 9, 1930 with the Al Capone-ordered hit on Chicago Tribune reporter Jake Lingle in a downtown Chicago railway station, and ending March 27, 1931 with the execution's only direct eyewitness, Notre Dame priest Father John Reynolds, testifying in the trial of Leo Brothers, the Capone henchman convicted in the murder.

The day after Father Reynolds got off the witness stand, he gave his plane ticket to his friend, Knute Rockne. The rest is documented history for the first time in these pages.