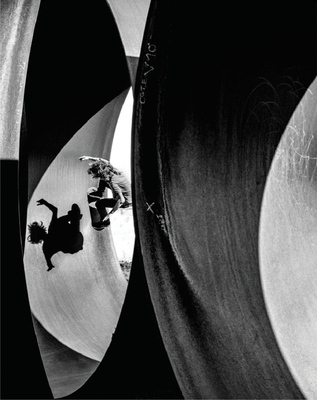 By Fred Mortagne (Photographer), Anton Corbijn (Foreword by), Geoff Rowley (Contribution by)
Email or call for price.
Hard to Find

Fred Mortagne is a self-taught French director and photographer who is internationally acclaimed for his images of skateboarding and street photography. Attraper au vol (Catch in the Air) is the culmination of Mortagne's photographic career, from 2000 to 2015. A feast of lines and angles, his black-and-white compositions blend his subjects into their environments, offering an abstract perspective on architecture, geometry and the human figure. His work intrigues both skaters and nonskaters alike, as it emphasizes the esthetic beauty of skate and urban culture rather than pure performance (although the raw talent of his subjects is readily apparent).

"As a young skate rat in the early nineties, I was super into watching skate videos, and very early I was sensitive to how the videos were made," he told an interviewer. "When the filming was good, I was super thrilled. This pushed me to begin filming my own clips with my friends, for fun ... for over 30 years, it has been the love of my life. Skateboarding has taken me to so many places--not just physically, but culturally and artistically."

This book includes a foreword by the world-renowned photographer Anton Corbijn and an essay by legendary skateboarder Geoff Rowley, with whom Mortagne has worked extensively.

Fred Mortagne, also known as French Fred, is a skateboarder, photographer and filmmaker living in France.