KANNJAWOU: A Novel of Haiti (Paperback) 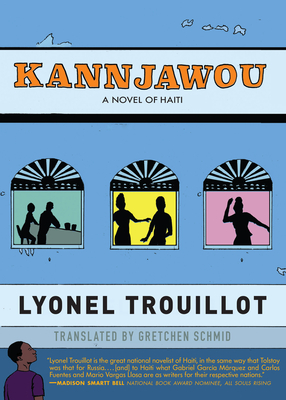 KANNJAWOU: A Novel of Haiti (Paperback)


Email or call for price
In this energetic celebration of Haiti and its capital in the early 2000s, Trouillot embodies the nation's indomitable spirit. The anonymous, world-weary, 20-something male narrator keenly depicts a country entering a new era after years of dictatorship and the chaos wrought by the most recent foreign arrivals: the international peace-keeping forces sent to restore order after the departure of the U.S. Marines. In a series of journal entries, the young protagonist introduces readers to his world within a world—a community center in Port-au-Prince peopled by a motley group of friends, lovers, revolutionaries, compatriots, dreamers, schemers, and mentors, all living under the watchful eye of Mam Jeanne, the proprietress. In KANNJAWOU Trouillot has penned a love song and a swan song to that era of dispersion for Haiti's people, who, even when they are far from home carry with them the kannjawou spirit.
Lyonel Trouillot is an award-winning novelist and poet, a journalist, and a professor of French and Creole literature. He has contributed his work to numerous publications in Haiti and has also provided song lyrics for Tambou Libete and Mannou Charlemagne. Troullot co-edits the journal Cahiers de Venderedi, and with his sister Evylene Trouillot, co-founded the literary organization Pre-Texte.