Becoming Coastal: 25 Years of Exploration and Discovery of the British Columbia Coast by Paddle, Oar and Sail (Paperback) 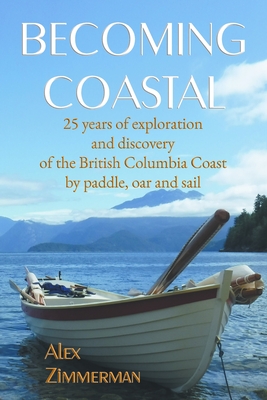 In this collection of narratives Victoria technologist, environmentalist and writer Alex Zimmerman tells stories not only of self-propelled travel and adventure but also of nature, the magnificent environment and of interesting people that he meets on the coast of British Columbia. Zimmerman is not the first to paddle and write about the BC Coast, but he brings a fresh and personal perspective as he details how he learns the necessary physical and mental skills of solo traveling. His encounters with the non-human inhabitants of the coast, the whales, wolves, bears and a super-pod of dolphins, are brought to life with a thrilling immediacy.


Zimmerman's writing evokes vivid visual imagery and he conveys to the reader a strong sense of being there. You will share with him the wonder, joy, fear and awe he experienced as he discovered the coast's geography, its ecology, its people and his own growing capabilities in the process of "becoming coastal."


Becoming Coastal is an awe-inspiring collection of memories that describes a transformation from land-dweller to ocean adventurer. Passages call us alongside to hear of trials and errors, exhilarating achievements, and lessons learned. With each paddle stroke from his hand-made crafts, Zimmerman helps us understand the benefits and joys of traveling slowly, deliberately, and respectfully - and the inner growth that comes with it."- Byron Ricks, author, & Maren Van Nostrand, illustrator, Homelands - Kayaking the Inside Passage


"Alex Zimmerman describes a journey through life where watercraft were instrumental in his development as a human being. Alex is a member of a diminishing breed of people who are still exploring the inaccessible parts of our huge world. His writing builds an enthusiasm to visit the rare and remote treasures he has discovered. In spite of the seriousness of his ventures, Becoming Coastal contains many laugh-out-loud moments. The reader gets pulled into his story until they are there, paddling along with him." Peter Freeman, author of Cape Horn Birthday


"Alex Zimmerman's absorbing account of his 25 years of exploring British Columbia's vast coastline in human and wind-powered boats is more than a travelogue; it is a story of discovery, determination and love of place. As a long-time expedition paddler, I know how encounters with boisterous whales, stealthy cougars and ambling bears can be simultaneously magical and terrifying. I understand the unpredictability - and the allure - of the remarkable places he visits, and writes so eloquently about. Join Alex in a land of double rainbows, midden beaches and glistening sea mammals. You won't be disappointed "- Susan Marie Conrad, author of Inside, One Woman's Journey Through the Inside Passage