A Diva Was a Female Version of a Wrestler: An Abbreviated Herstory of World Wrestling Entertainment (Paperback) 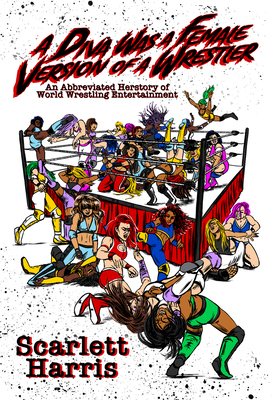 Lifelong wrestling fan and critic Scarlett Harris uses big ideas, such as #MeToo, the commodification of feminism, and how we tell women's stories to chart the rise and fall and rise of women’s wrestling.

Scarlett Harris is an Australian culture critic. She has been published in such outlets as Playboy, VICE, The Huffington Post, Vox, Shondaland, and many others. You can find her at her website The Scarlett Woman and on Twitter @ScarlettEHarris. A Diva Was a Female Version of a Wrestler is her first book.

"A Diva Was a Female Version of a Wrestler is an accessible read for wrestling novices and newcomers hoping to learn more about this world, while also managing to be a compelling and fulfilling read for wrestling experts and obsessives.—LaToya Ferguson, author of An Encyclopedia of Women’s Wrestling

"Diva is not just another retelling of the same title matches of yesteryear—it firmly calls for the future of women’s wrestling to be placed in the hands of women themselves."—Heather Bandenberg, author of Unladylike: A Grrrl’s Guide to Wrestling

"Often when I read a good wrestling book I will find myself saying “I didn’t know that” about parts of the content. In this case my reaction was more often “I hadn’t thought of it that way” and that makes for a refreshing change." —John Lister, Prowrestling Books

"Diva provides an intricate history of women’s wrestling, and the abhorrent hand WWE had in shaping the state of women’s wrestling in the past, while also providing thoughtful discourse on how everyone needs to be a positive part of crafting equality for all women, in all aspects of the business." —Kristen Ashly, Bell to Belles