Berserk: The Shocking Life and Death of Edwin Valero (Paperback) 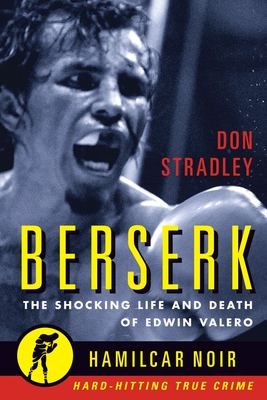 Just finished Don Stradley's book on Edwin Valero, Berserk. Outstanding. Predictably so because 1) Don is a super writer, and 2) the story is chilling and amazing.--Steve Farhood, Showtime boxing analyst, and International Boxing Hall of Fame member

There's no telling what went on during the next few hours, or where his paranoia took him, but in that room something terrible happened. At 5:30 a.m. Valero appeared in the lobby. As calmly as one might order something from room service, he told the staff that he had just killed his wife. Within the dark pages of Berserk: The Shocking Life and Death of Edwin Valero, author Don Stradley uncovers the gritty details of the undefeated (27-0, 27 KO), troubled, boxer Edwin Valero. Edwin Valero's life was like a rocket shot into a wall. With a perfect knockout record in twenty-seven fights, the demonic Venezuelan boxer, known as "El Inca" and "El Dinamita," seemed destined for a clash with all-time great Manny Pacquiao. But the Fates had other ideas. Fueled by cocaine and booze and paranoia, Valero blazed into a mania that derailed his career in the ring and resulted in the brutal death of his young wife Jennifer-and soon afterward, his own. In chilling detail, Don Stradley captures one of the darkest and most sensational boxing stories in recent memory, which, until now, has never been fully told. Filled with firsthand accounts from the men who trained Valero and the reporters who covered him, as well as insights from psychologists and forensic experts, Berserk is a hell-ride of a book. Berserk is the first in the Hamilcar Noir series, from Hamilcar Publications. Hamilcar Noir is Hard-Hitting True Crime that blends boxing and true crime, featuring riveting stories captured in high-quality prose, with cover art inspired by classic pulp novels. Perfect Gift For Boxing and True Crime Fans Berserk, combined with other books in the Hamilcar Noir series, makes a great gift for fans of stories about the darker side of boxing. Books in the Hamilcar Noir series also make for a great gift idea for true crime fans--whether they are a die-hard boxing fan or not, they will devour these quick reads and ask for more