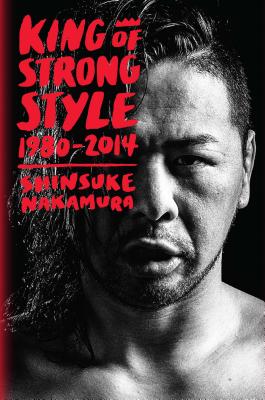 The life of the internationally famous professional wrestler Shinsuke Nakamura, from his childhood to the International Wrestling Grand Prix championship, and beyond!

Before he became a star of American professional wrestling, Shinsuke Nakamura was Japan’s “King of Strong Style.” Follow his life and career from the amateur grappling ranks to the Nippon Budokon, thrill to his matches against such legends as Kurt Angle and Brock Lesnar, his reign as the youngest New Japan Pro-Wrestling Heavyweight Champion, and his success as a mixed martial artist.

Born in Kyoto, February 24, 1980, Shinsuke Nakamura began amateur wrestling in high school before attending university at Aoyama Gakuin University. After a brilliant career there, he joined New Japan Pro-Wrestling in March 2002 and made his professional debut at Nippon Budokan in a match against Tadao Yasuda on August 29, 2002. On December 9, 2003, a mere sixteen months into his professional career, he crushed Hiroshi Tenzan and was crowned the youngest IWGP Heavyweight Champion in history. Even as he pursued greatness in the professional wrestling ring, Nakamura participated in MMA, facing Daniel Gracie of the legendary jiu-jitsu family, and superheavyweight kickboxing champion Alexey Ignashov. Now in the US and a WWE Superstar, Nakamura has twice held the NXT championship and is known to millions as both The Artist and the King of Strong Style.

A great read, King of Strong Style is a deep, step by step journey
that follows Nakamura through his coronation as one of the most
electric and charismatic performers in Japanese Wrestling history.
The perfect prologue for Nakamura's ascension to Wrestlemania
greatness on a global scale, it opens him up to his audience in a way
that not even WWE has been able to accomplish....
— Mike Johnson

"Much like Nakamura confidently struts the line between artist and athlete, here he is equal parts raconteur and friendly acquaintance. King of Strong Style: 1980-2014 is a unique lens on a trying and crucial time in the history of Puroresu. It is a must read for every New Japan Pro Wrestling fan and a comprehensive primer for the most unique wrestler of this early century."
— Ross W. Berman