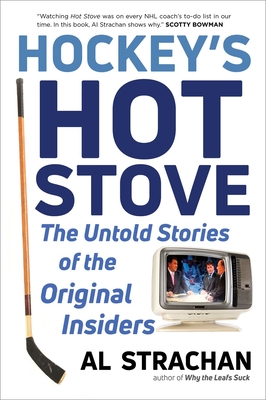 Stories from behind the scenes of one of hockey’s longest running and most popular broadcasts, Hockey Night in Canada’s Satellite Hot Stove, from an insider who’s seen it all.

For more than twenty years, hockey fans tuned in during intermission on Saturday nights to watch one of the most popular segments in the game’s long broadcasting history. They’d hear news from around the league, the latest rumours and gossip, and—of course—some of the most controversial opinions of the day.

No, we’re not talking about Coach’s Corner.

The Satellite Hot Stove was a revolutionary show for talking about the game we love. Here, during the second intermission of the first game of every Hockey Night in Canada broadcast, pundits, and insiders would convene in studios across North America—in arenas and other locales—to discuss the biggest topics. Hot Stove was the best place to get news, opinions, and a good laugh.

And Al Strachan was in the middle of it all. A bestselling author and award-winning sports journalist, he has been writing and talking about hockey for more than forty years. As a regular TV pundit on Hot Stove, he witnessed the most exciting and talked-about episodes in the modern game. And more than once, his unfiltered, say-it-as-it-is style added controversy of its own, too. In this new book, he relives the best stories of his long career, from working with some of the biggest personalities, on and off the ice, to the hijinks that went on behind the cameras.

From embarrassing himself in front of Scotty Bowman, to cooking up a plan with Wayne Gretzky to save hockey, and frank conversations with Ken Dryden and hockey’s elite, Hockey’s Hot Stove delivers all new hockey stories you won’t hear anywhere else.

Al Strachan is a journalist and former columnist for the Toronto Sun, The Globe and Mail, and The Montreal Gazette. He was a regular commentator on Hockey Night in Canada, The Score, and The Satellite Hot Stove. Strachan has been writing about hockey and hanging out with NHL players, coaches, general managers, and owners for more than forty years. He is a member of the media section of the Hockey Hall of Fame. Connect with him on Twitter @Winsford99.

“Watching Hot Stove was on every NHL coach’s to-do list in our time. In this book, Al Strachan shows why.”
— SCOTTY BOWMAN, NHL coach and executive

“For years I have argued that what we really need is a good ‘Outsider’ to balance out the hordes of ‘Hockey Insiders.’ Someone who is willing to go far beyond the contract breakdowns and trade rumours that pass for news and have no fear of taking on the sacred cows and power mongers. Hockey’s Hot Stove sizzles on every page, as Al Strachan offers up his piercing, often hilarious, insights into the game we all love. Having started out as an original hockey insider, Strachan is now the outsider we have been looking for. Come back, Al, the game needs more of you!”
— ROY MACGREGOR, bestselling author

“No one in the hockey world ever wanted to miss Hot Stove. On the west coast, we often had a tough call to make because the Canucks generally played at home on Saturday. Should we leave home early enough to watch it at the rink and then have almost an hour to kill? Or should we watch it at home and then have to rush and fight late traffic? Either way, not seeing Hot Stove wasn’t an option. There was always something new that was simply too important to miss.”
— TONY GALLAGHER, sports writer and columnist

“There was never a dull moment working with Al on Hot Stove. Frustrating moments, maddening moments, fun moments, but never dull. Hockey Night in Canada was the big show in the big land and being a part of Hot Stove was a tremendous honour. A lot of great memories in this book.”
— SCOTT MORRISON, sports journalist and author

“This is Hot Stove’s beginnings, from its radio days; its middle when Strachan, Eric Duhatschek, John Davidson, and others were breaking stories as an ideal second intermission bookend with Coach’s Corner; and its end, the often brash author ticking off too many suits at the CBC. There were feuds such as with Brian Burke, but Al’s bond with Wayne Gretzky and big names in the game helped make the show flow.”
— Ottawa Sun