A Chosen Destiny: My Story (Paperback) 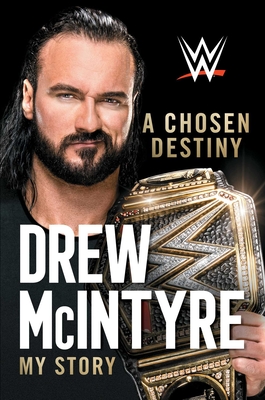 In this thrilling, no-holds-barred memoir that shows why he is “an inspiration to millions of WWE fans around the world” (Triple H), WWE Champion Drew McIntyre tells the incredible roller-coaster story of his life, from a small village in Ayrshire, Scotland, to the bright lights of WWE.

From a young age, Drew McIntyre dreamed of becoming a WWE Champion and following in the footsteps of his heroes “Stone Cold” Steve Austin and The Undertaker. With his parents’ support, he trained and paid his dues, proving himself to tiny crowds in the UK’s Butlin circuit. At age twenty-two, McIntyre made his WWE debut and was touted by none other than WWE Chairman Vince McMahon as “The Chosen One” who would lead WWE into the future. With his destiny in the palms of his hands, Drew watched it all slip through his fingers.

Via a series of ill-advised choices and family tragedy, Drew’s life and career spiraled. As a surefire champ, he struggled under the pressure of expectations and was fired from the company. But the WWE Universe had not seen the last of this promising athlete. Facing a crossroads, the powerful Scotsman set a course to show the world the real Drew McIntyre.

Buoyed by the support of his wife, Kaitlyn, and the memory of his beloved mother, Drew embarked on a mission to recharge, reinvent, and revitalize himself to fulfill his destiny. This is a story of grit, courage, and determination as a fallen Superstar discovers who he truly is and storms back to reclaim his dream.

Drew McIntyre (a.k.a. Drew Galloway) is a two-time WWE Champion, one-time Intercontinental and NXT Champion, and two-time tag team champion in WWE. He has also claimed several championships and accolades in promotions such as Irish Whip Wrestling, Insane Championship Wrestling, and Evolve. He is known for his imposing physique and brute strength in the ring, and his dominant finishing move, the Claymore Kick. He resides in Florida with his wife, Kaitlyn, and adored cats, Hunter and Chaz.

“Through the years, I’ve seen firsthand the hard work that Drew McIntyre puts forth both in and out of the ring to be the best. His determination is what gives him the ability to overcome any adversity, and it is what makes him an inspiration to millions of WWE fans around the world.”—Triple H

“I’ve followed Drew’s career for many years. He has had an incredible journey, and now he is on top of the world, kicking ass.”—"Stone Cold" Steve Austin

“WWE is a nonstop climb, with every type of pitfall, obstacle, and barrier imaginable on your way to the top. No one was built for the challenge like Drew McIntyre.” —Shawn Michaels

“Drew is a Goliath with the heart of a David. I’m thrilled to see what he has achieved but more excited for the greatness that lies ahead.”—Bret Hart

“With Drew, it isn’t just the mountains climbed and the roads travelled. It’s the way he has gone about his business: with humility, passion and true fire.”—Billy Corgan of Smashing Pumpkins