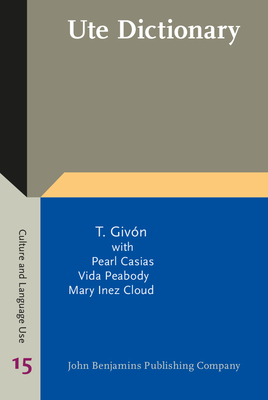 This is book number 15 in the Culture and Language Use series.

This third volume of our Ute language collection contains the Ute dictionary. It opens with several introductory chapters that link the dictionary to our Ute Reference Grammar (2011) and explain the structure and use of the dictionary. The bulk of the information on the meaning and usage of Ute words is then given in the Ute-English part. The English-Ute part, next, serves primarily as a search-and-reference tool. A short section on traditional semantic-cultural fields follows. Ute is a Northern Uto-Aztecan language of the Numic sub-family. Together with its northern dialects (Southern Paiute, Uintah, White River), it should be considered a single language, N uchi ("of the people") or N u-'apaghapi ("the people's speech"). While our work was done primarily in the southern dialects (Southern Ute, Ute Mountain, Uncompaghre), we have included as many words as could be safely extracted from Powel's and Smith's work on the northern dialects, as well as some from Sapir's work (1931) on Northern Ute, adjusting them to Southern-dialect pronunciation. This brings the work as close as one could hope, at this time, to a comprehensive all-Ute dictionary, a task that yet remains to be done. We have tried to emphasize in the Ute-English entries the historical and derivational connectivity of Ute vocabulary and its gradual growth and expansion. This is also underscored in the introductory chapter on word derivation. While this work remains incomplete, we hope it can be some day expanded into an all-inclusive Ute dictionary, and will help the people - N uchiu - preserve their language and culture.