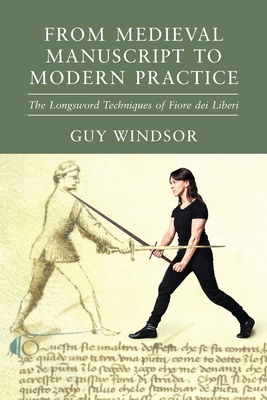 In From Medieval Manuscript to Modern Practice, renowned historical swordsman Guy Windsor demystifies one of the greatest martial arts books of all time, Fiore dei Liberi's Il Fior di Battaglia (The Flower of Battle).
In the late 14th century dei Liberi, an Italian knightly combat master, wrote Il Fior di Battaglia (The Flower of Battle). This magnificent, illustrated manuscript described how to fight on foot and on horseback, in armour and without, with sword, spear, pollax, dagger, or with no weapon at all.Windsor spent the last twenty years studying Fiore's work and creating a modern practice of historical swordsmanship from it.In this book, Windsor takes you through all of Fiore's longsword techniques on foot without armour. Each technique (or "play") is shown with the drawing from the treatise, Windsor's transcription and translation of the text, his commentary on how it fits into the system and works in practice, and a link to a video of the technique in action. The book also contains a detailed introduction describing Fiore's life and times, and extensive discussion of the contexts in which Fiore's art belongs.From Medieval Manuscript to Modern Practice is essential reading for all martial artists and historians of the medieval and early Renaissance.