An Evening with Alex London, Margaret Stohl, and Mackenzi Lee 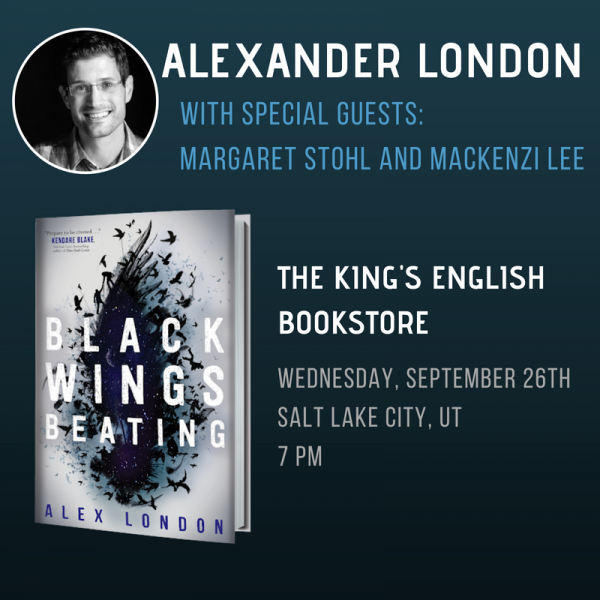 Alex London, Margaret Stohl, and Mackenzi Lee will discuss and sign their books in an evening of YA fun and excitement!

The people of Uztar have long looked to the sky with hope and wonder. Nothing in their world is more revered than the birds of prey and no one more honored than the falconers who call them to their fists. Brysen strives to be a great falconer--while his twin sister, Kylee, rejects her ancient gifts for the sport and wishes to be free of falconry. She's nearly made it out, too, but a war is rolling toward their home in the Six Villages, and no bird or falconer will be safe.Together the twins must journey into the treacherous mountains to trap the Ghost Eagle, the greatest of the Uztari birds and a solitary killer. Brysen goes for the boy he loves and the glory he's long craved, and Kylee to atone for her past and to protect her brother's future. But both are hunted by those who seek one thing: power.

Cats Vs. Robots: This is War by Margaret Stohl

The longstanding and galaxy-spanning war between cats and robots escalates when each learns of inventions designed to extend their lives, and the potential of the devices is revealed when two kittens come into the lives of twin siblings on Earth.

The Lady's Guide to Petticoats and Piracy by Mackenzi Lee

A year after an accidentally whirlwind grand tour with her brother Monty, Felicity Montague has returned to England with two goals in mind--avoid the marriage proposal of a lovestruck suitor from Edinburgh and enroll in medical school. However, her intellect and passion will never be enough in the eyes of the administrators, who see men as the sole guardians of science. But then a window of opportunity opens--a doctor she idolizes is marrying an old friend of hers in Germany. Felicity believes if she could meet this man he could change her future, but she has no money of her own to make the trip. Luckily, a mysterious young woman is willing to pay Felicity's way, so long as she's allowed to travel with Felicity disguised as her maid.In spite of her suspicions, Felicity agrees, but once the girl's true motives are revealed, Felicity becomes part of a perilous quest that leads them from the German countryside to the promenades of Zurich to secrets lurking beneath the Atlantic.

The Lady's Guide to Petticoats and Piracy (Montague Siblings #2) (Hardcover)