Prepare yourself for a FIERCE time at Fierce Reads Game Night 2022! 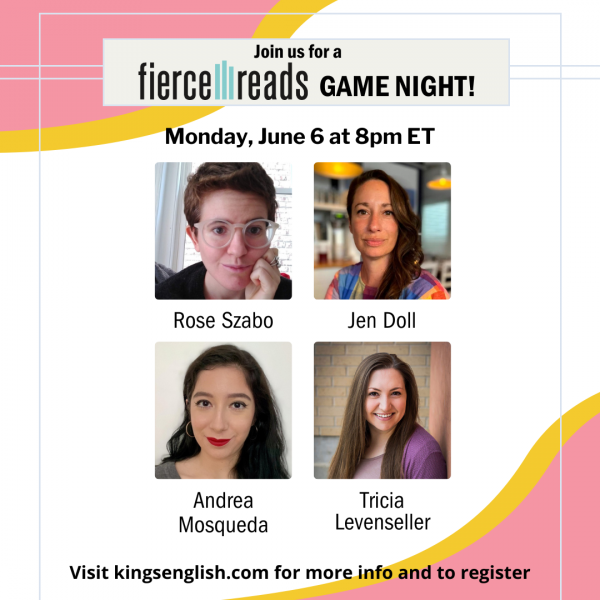 TKE proudly presents YA authors Jen Doll (That's Debatable), Tricia Levenseller (Master of Iron), Andrea Mosqueda (Just Your Local Bisexual Disaster) and Rose Szabo (We All Fall Down) for an online evening of fun and games!

This free, virtual event will take place on Crowdcast and you must register here to participate. This interactive event will include a wild game of MadLibs and a Q and A.

She’s here to win, and she’s on track to set a record if—no, when—she wins the state debate tournament for the fourth year in a row. Calm, cool, and always in control, Millie doesn’t care what anyone else thinks of her, least of all the sexist bullies bent on destroying her reputation.

Taggart Strong couldn’t care less about winning debate, much to the consternation of his teammates, school and parents. In fact, he might even enjoy losing, as long as the side he believes in wins.

But when a tournament takes a scary turn, Millie and Tag find themselves unexpectedly working together. Maybe Millie can teach Tag a thing or two about using his head, and Tag can teach Millie a little bit about following her heart.

In Master of Iron, the conclusion to Tricia Levenseller’s exciting Bladesmith YA fantasy duology, a magically gifted blacksmith with social anxiety must race against the clock to save her beloved sister and stop a devastating war.

Eighteen-year-old Ziva may have defeated a deadly warlord, but the price was almost too much. Ziva is forced into a breakneck race to a nearby city with the handsome mercenary, Kellyn, and the young scholar, Petrik, to find a powerful magical healer who can save her sister’s life.

When the events that follow lead to Ziva and Kellyn’s capture by an ambitious prince, Ziva is forced into the very situation she’s been dreading: magicking dangerous weapons meant for world domination.

The forge has always been Ziva’s safe space, a place to avoid society and the anxiety it causes her, but now it is her prison, and she’s not sure just how much of herself she’ll have to sacrifice to save Kellyn and take center stage in the very war she’s been trying to stop.

Growing up in Texas’s Rio Grande Valley, Maggie Gonzalez has always been a little messy, but she’s okay with that. After all, she has a great family, a goofy group of friends, a rocky romantic history, and dreams of being a music photographer. Tasked with picking an escort for her little sister’s quinceañera, Maggie has to face the truth: that her feelings about her friends—and her future—aren’t as simple as she’d once believed.

As Maggie’s search for the perfect escort continues, she’s forced to confront new (and old) feelings for three of her friends: Amanda, her best friend and first-ever crush; Matthew, her ex-boyfriend twice-over who refuses to stop flirting with her, and Dani, the new girl who has romantic baggage of her own. On top of this romantic disaster, she can’t stop thinking about the uncertainty of her own plans for the future and what that means for the people she loves.

As the weeks wind down and the boundaries between friendship and love become hazy, Maggie finds herself more and more confused with each photo. When her tried-and-true medium causes more chaos than calm, Maggie needs to figure out how to avoid certain disaster—or be brave enough to dive right into it, in Just Your Local Bisexual Disaster.

We All Fall Down

In River City, where magic used to thrive and is now fading, the witches who once ruled the city along with their powerful King have become all but obsolete. The city's crumbling government is now controlled primarily by the new university and teaching hospital, which has grown to take over half of the city.

Moving between the decaying Old City and the ruthless New, four young queer people struggle with the daily hazards of life—work, school, dodging ruthless cops and unscrupulous scientists—not realizing that they have been selected to play in an age-old drama that revives the flow of magic through their world. When a mysterious death rocks their fragile peace, the four are brought into each other's orbits as they uncover a deeper magical conspiracy.

Devastating, gorgeous, and utterly unique, We All Fall Down examines the complex network of pain created by power differentials, even between people who love each other—and how it is possible to be queer and turn out just fine.

Rose Szabo is a nonbinary writer from Richmond, VA, where they live with an assortment of people and animals and teach writing at VCU. They have an MA in English from the University of Maine and an MFA in creative writing from VCU. Their work has been published in See the Elephant and Quaint magazines. What Big Teeth is their first novel.

Tricia Levenseller, author of several YA fantasy books, including The Shadows Between Us and the Daughter of the Pirate King duology, grew up in Oregon, where she spent her childhood climbing trees and playing make believe. She now lives in Utah with her bossy dog, Rosy, where she writes full time. When she's not writing or reading, Tricia enjoys putting together jigsaw puzzles, playing Overwatch and Sea of Thieves on her Xbox, and finding tasty restaurants to frequent.

Jen Doll is the author of the young adult novel, Unclaimed Baggage which was a New York Times Staff Pick, an NPR Best Book of 2018, a Buzzfeed Best YA Book and a Cosmo Best New Book of 2018. She is also the author of the memoir, Save the Date: The Occasional Mortifications of a Serial Wedding Guest. She's written for The Atlantic, Elle, Esquire, Glamour, GQ, New York Magazine, The New York Times Book Review, Vice, The Village Voice, The Week, and many other publications. She grew up in Alabama and lives in upstate New York.

Andrea Mosqueda is a Chicana writer. She was born and raised in Texas’s Rio Grande Valley. She currently lives in Brooklyn with her partner and works in the publishing industry as an assistant editor. When she’s not writing or editing, she can be found doing her makeup, drinking too much coffee, and angsting over children’s media. Just Your Local Bisexual Disaster is her first book.

We All Fall Down (The River City Duology #1) (Hardcover)