Lights up on Washington Heights! 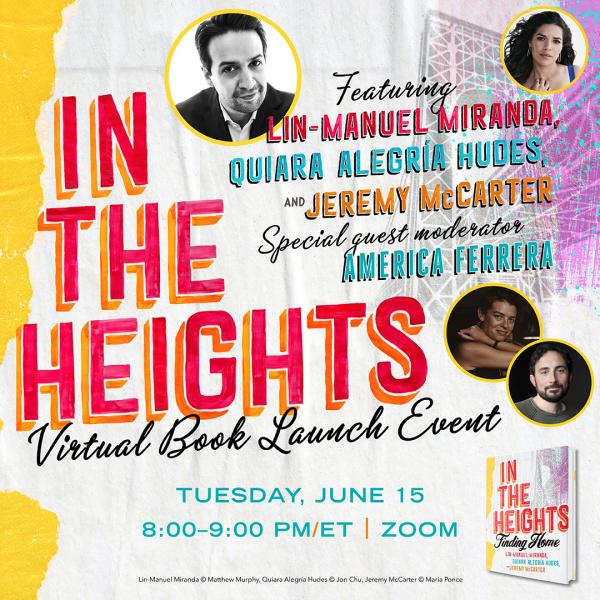 Before Hamilton became a global phenomenon, before Lin-Manuel Miranda became a household name, a little show called In the Heights shook up Broadway with its hip-hop and salsa soundtrack and big, bilingual heart. In the new book In the Heights: Finding Home, Lin-Manuel Miranda, Quiara Alegría Hudes, and Jeremy McCartertell the story of the show’s humble beginnings, from rehearsals in a bookstore basement to the Broadway smash (and soon-to-be feature film!) that created an unbreakable community and a new kind of family for everyone involved. Special guest moderator for this event will be award-winning actor, director and producer America Ferrera, who joined the authors in narrating the upcoming audiobook.

Join Miranda, Hudes, and McCarter for a very special In the Heights Virtual Book Launch on Tuesday, June 15 from 6:00 to 7:00 p.m. MST (8:00 to 9:00pm EST) on Zoom. Sure to be an unforgettable conversation on creativity, community, and finding home, this is your chance to hear directly from the creative team behind the timeless story of how one neighborhood—Washington Heights—can speak to the world.

Your $50 ticket includes admission to this exclusive event, a hardcover copy of In the Heights: Finding Home ($40 retail price), as well as sales tax, shipping within the US, and handling (if applicable).

In the Heights: Finding Home (Hardcover)