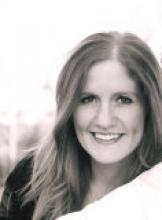 Ann Dee was born in Provo, Utah. She has eight older brothers and sisters who supposedly never made her get them ice water every ten minutes and never made her scratch their backs for a nickel an hour.She wrote a long story when she was in fifth grade. Really long. Like twenty five pages single-spaced. She entered that story in a young author’s contest. She didn’t win.In fifth grade she also had a boyfriend named Ryan*. He didn’t know he was her boyfriend and he liked a girl named Lori and they started “going together.” This was sad. Ann Dee recovered by eating many many tootsie rolls and gobstoppers.

In junior high, Ann Dee had another boyfriend named Luke. Like Ryan, he also didn’t know he was her boyfriend. They were together for most of high school. When he finally found out about the relationship, they broke up.

Besides having a steady boyfriend who didn’t know he was her boyfriend, Ann Dee played soccer and basketball. She went to prom.