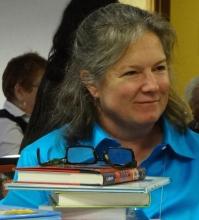 My mom used to yell at me to come out from the other side of the bed and play with my friends who had come over to visit. It wasn't that I didn't want to play; it was just that a book, pretty much any book, had caught my attention and carried me away. A reader since I was old enough to hold a book, it never occurred to me that a person could actually have a JOB where books and people could come together and one could actually earn money doing it. A brief stint at Waldenbooks at the old Crossroads Mall in Salt Lake City cemented my love for working in a bookstore. Even processing "returns" was fascinating to me. Next came a job at the circulation desk at the Salt Lake City public library which was really fun but not the same as retail. Many years and two kids later I found myself back in Salt Lake. The King's English has been my home away from home for over 20 years now and I can't imagine doing anything else.

The World and All That It Holds: A Novel (Hardcover)

Sarajevo, 1914: Pinto the apothecary hears a loud noise in the street outside, follows it, and becomes witness to the assassination of Archduke Ferdinand. It’s what follows that matters though; in the next chapter we meet Pinto again in 1916 Polish Galicia as a soldat in the Bosnian army where he meets and falls in love with Osman, a fellow soldier. As we move across the world and time with the two of them we see how history has treated LGBTQ people, Jews, and other political refugees. More than anything else, this is a love story for the ages and a wonderful way to start my new year of reading.

Like so many novels about the west, this is a story about water, the lack of it, the lust for it, the theft of it. Specifically, this is a story of the city of Los Angeles re-routing an entire water system from the ranchers who owned it to the thirsty citizens who needed it. And one rancher whose land was also seized to build an airstrip for the U.S. military. Why? Because of what they were building across the road from him—Manzanar. To set the stage, the rancher, Rocky, has learned that his enlisted son, Stryker, is missing in Hawaii in the days after the bombing of Pearl Harbor. A young man, Schiff, appears at Rocky’s door, to “ask” about the property across the street. It turns out, Schiff works for the War department, is Jewish, and is about to get way more than he bargained for. Sunny, Rocky’s daughter and Stryker’s twin sister is a big part of what Schiff isn’t expecting. This is a marvelous, gut-wrenching story of the personal toll, WWII took on America. I will recommend this to everyone!

This WWII story is told through the lens of a low-budget Hollywood movie studio and the people affiliated with it both closely and from afar. The main character, Maria Lagana, has come to California after fleeing Mussolini’s Italy. Her mother came with her; her father is another part of this tale. Maria is Artie Feldman’s right-hand person but because it’s the 40’s and she’s a woman, she’s working a lot and getting little in return. Also, because there is a war raging and she’s Italian, Maria has to carry papers as a registered alien, is restricted to certain parts of Los Angeles and must abide by curfew. Oh, and she’s dating Eddie Lu, a Chinese American who, though trained as a Shakespearean actor, can only get bit roles as Asian “bad guys”. If any of this sounds timely it’s because Anthony Marra is a master at taking history and playing it back to us as story. This book is brilliant and long-awaited. If you were a fan of A Constellation of Vital Phenomena, this book was worth the wait!

Lessons in Chemistry: A Novel (Hardcover)

This debut set in Auckland, New Zealand and the surrounding countryside, is fast paced and fascinating. Hana Westerman, is a senior police detective, a Maori, and a mother. All of that comes into play as she chases a serial killer intent on righting the wrongs of the colonial past. I hope this is the first of many!

Once again, Lydia Millet has created characters that I'd like to know, some that I'd like to be friends with, and some who are just so interesting (Jason). If there were more people like Gil in the world, we could all be happier. Her writing in this book is quiet and sublime at the same time. I loved it!

Margo Price's songs are a retelling of the pain, heartache, and joy that have impacted every part of her life. Reading any great story, one wonders how much of it is true; did it really happen like that? For Margo, much of it did; luckily for us, she did make it and we are the richer for it.

Our protagonist, Charlie Minkoff, is 16 at the time of this novel. His mother, Jules, is an absent-minded and successful artist and his father, Nathan, has deserted them and returned to his Hasidic roots in Crown Heights. A smelly little dachshund named Gellman rounds out this family and if it weren't for Jules' best friend Weezie (lesbian long-haul trucker) their lives would be chaotic and maybe not even survivable. What Charlie wants more than anything is to help his 80-year-old grandpa, Oscar, make his bar mitzvah since the Nazis effectively kept that from happening when it should have. Delighted, Oscar decides the two men should make their journey to the Torah together but here's the problem. Charlie was born intersex and according to the rabbi, the Bible has clear rules on who can (men) and cannot (women) have a bar mitzvah. I loved this funny, maddening story of who gets to decide what another person gets to do and what happens when that person takes the reins of their life and literally rides off into the sunset.

On Swift Horses: A Novel (Paperback)

It’s the late 1950s. The Korean War is over, and Vietnam is getting started. For brothers, Julius and Lee, newly home on leave, getting out of Kansas and starting anew in San Diego means the beginning of the American Dream. For Lee, it’s his new wife, Muriel and the promise of a house in the suburbs. For Julius, it’s less clear. These were still early days in the West; folks were watching atomic bombs blow up from the tops of hotels on Fremont street in Las Vegas, and decency laws still lived on the books and in people’s minds. As we follow Julius and Muriel alternately, we see two people, part of the Greatest Generation, trying to be true to themselves.

The Sinaloa cartel thanks you…” Rice Morton isn’t who he appears to be. Charged with protecting a wildlife preserve deep in the remote Virginia forest, he can stay hidden. He’s just beginning to relax when he’s lead to a bear carcass and so begins a crusade against the poachers—a crusade that may prove his undoing. His do-it-yourself witsec program is no match for the cartel he’s bloodied the nose of, and an aggrieved FBI agent is pointing the cartel right at him. – Paula Longhurst

If you take the true grit of Mattie Ross and mix it with the disguises and daring-do of the Scarlet Pimpernel you get a glimpse of Jessilyn Harney in this amazing novel of the West when gunslingers were for hire and politics didn't look too different from the way they look today. After caring for her father until his death, Jess loads the only thing left to her, his rifle, and sets off to look for her runaway older brother. She doesn’t have to look too long or too far; he’s created quite a name for himself as an outlaw with a Robin Hood streak to his talents. I loved this story of the lengths people will go to to protect their families, blood-related or not.

The Night Tiger: A Novel (Paperback)

A young girl and boy, step-siblings by marriage, are on the verge of adulthood and more. Add in missing fingers, mounting mah jong debts, a loyal house-boy, a were-tiger and more and you have a fantastical tale of magical realism in Malaysia in the early 1930's. Such a fun read!

Ruth Young’s father, professor Howard Young is in the early stages of dementia. Her mother has asked her to come home, for a year maybe, to help, and since her fiancé has left her for another woman, Ruth decides she might as well. She loves her father but he hasn’t always been faithful to her mother so she’s conflicted. But life is not black and white and when her father’s teaching assistant asks her to help him create a “pretend” class for her dad to teach, Ruth goes along with it. In the process, she learns that while the mind forgets some things, the heart doesn’t and love and forgiveness matter more than anything. This is Khong’s first novel and it’s both funny and sad; I loved it.

Ajatashatru Oghash Rathod, the fakir, flies from Rajasthan, India to Paris to purchase the Hertsyörbåk bed of nails advertised for a mere €99 by IKEA. Unfortunately, that model is out of stock until the next morning. Fortunately for the reader, Aja opts to spend the night in the “bedroom” section of the giant store and so his adventure begins. In a wild series of mistaken identities, misunderstandings, and pure mishaps, our fakir ends up traveling all over Western Europe (and Africa!) in a variety of contraptions including a hot air balloon. What could be contrived in less capable hands, is instead a lovely novel of the journey to find a bed and finding so much more.

Another Brooklyn: A Novel (Paperback)

In her first novel for adults, Jacqueline Woodson writes a very real story of four young girls growing up in Brooklyn in the ‘70s. And it may be a story about being black but it felt universal to me. August is a young woman coming of age and coming in to her power, and she understands some things and wonders mightily about others. But in the meantime, she does her homework, says no to boys when she needs to and goes off to college when some of her friends make other choices or have choices made for them. It’s the old adage, “We are all different, we are all alike”. I would have loved to have been friends with August.

Be Frank With Me: A Novel (Paperback)

Even Frank’s mother calls him a “character” and from the novel’s opening pages it’s clear the label fits. Everything about the 9-year-old, from the clothes he wears to his encyclopedic knowledge of the early days of Hollywood (and a little of everything else) is intriguing, and will have you eagerly turning the pages, dying to know what he’ll come up with next. Frank’s mother, Mimi, is on deadline to deliver a manuscript that doesn’t seem to be happening. The publisher sends its Gal Friday, Alice Whitley, to “help” Mimi finish the book. Mimi adamantly doesn’t want help and Frank needs help, or supervision anyway. So Frank and Alice are left to their own devices while the typewriter keeps up a clickety clack behind the closed door of Mimi’s office. Revealing too much about the plot would only ruin the surprise and delight that await you.

The Plover: A Novel (Paperback)